The Easter Egg C2C (Corner to Corner) Square is Part 4 in the Easter Blanket Graphgan CAL (Crochet a Long) at Nana’s Crafty Home!

This pattern is also available as an ad-free, printable PDF! You can purchase the individual pattern, or if you love PDFs, you might want to check out my Lifetime Membership. It’s an awesome deal! Never pay for one of my PDFs again!! (Or, scroll down for the free version!)

Purchase the ad-free pdf of this pattern for a small fee at HERE.  Thank you so much for supporting my work!

How to Read C2C Graphs and Written instructions

Tools to help with yarn tangling while working corner to corner graphs consider the following:

Pattern written in US crochet terminology

Once last row is worked, turn (RS), ch 1, sc evenly around outside edge of square, working (sc, ch 2, sc) in each corner, sl st to top of 1st st.  Note:  each pixel square will have alternating 2 sc or 3 sc along the edge. 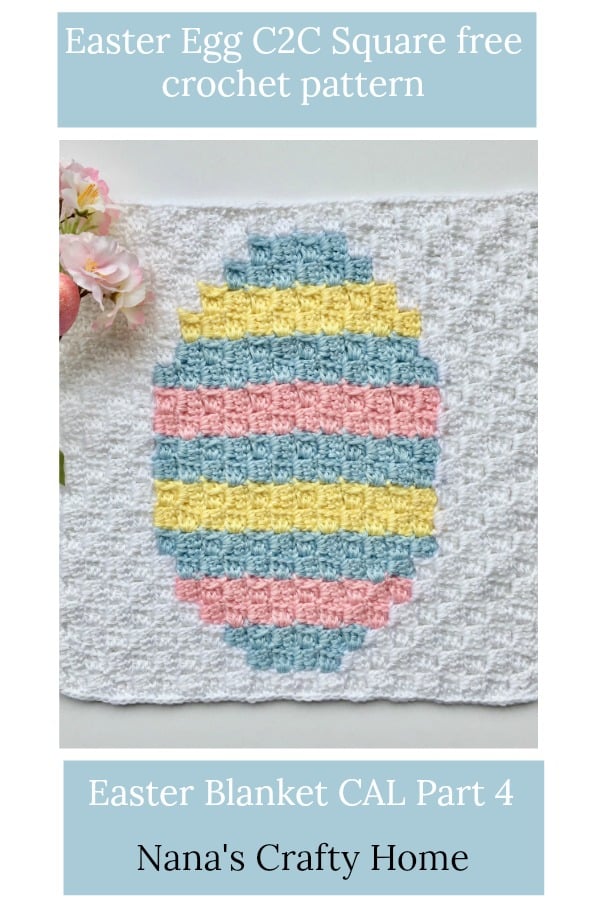 Hi! Thank you so much for being here! I am Tonya the designer behind Nana's Crafty Home. As a wife, mother, Nana of 9 & with 2 fur babies, my days are filled with love, laughter, hugs and yarn! Here you will find colorful and creative crochet designs for yourself or loved ones. My hope is that you will be inspired to learn and create along with me!